The last ladies match of the season sees Wychelm take the scores right to the wire!

So, Wychelm’s last match of the season was played tonight in the form of a ladies pairs match for both our A team – myself and Kay – as well as B team, consisting of Tracy and Janet. Situated at Redbridge’s massive 12 court centre, we were ready and waiting for the 8pm kick off time, looking forward to hopefully continuing our lead at the top of the division table. We weren’t counting our chickens yet, but Kay and I had everything crossed that a solid performance tonight would see us take Wychelm to victory, as well as a promotion back in to Division One. 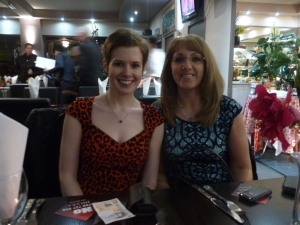 For Kay and myself, we found our matches tonight incredibly close. Starting off against Corinthians’ pairing of Ruth and Lesley, we made a strong start, fully engaging in our tactics which basically consist of me doing a lot of shouting and us rotating around each other to keep the shuttle in play as long as possible before the right kill shot presents itself. We stuck to our guns here and it paid off, although I also noticed that Kay tackled the net a lot more than usual tonight, performing some excellent lifts from some very tricky net play. Succeeding in the first game is always a nice place to start and helps to build your confidence for the rest of the evening.

Next on the agenda were Wychelm’s B team, so players we know very well indeed! Janet played some superb cross court shots during this match, utilising a backhand diagonal drop that was rather pesky to return, whilst Tracy was a firecracker at the front of the court, shooting back returns from serves that dithered vaguely for a full frontal attack. Kay and I plugged away though and I think all the practice we’ve been trying to do on Mondays has definitely paid off as it has made our team work stronger, although I did make a few late or dud calls in this game which caused poor Kay some confusion! I think it’s because I knew that we were currently sitting at the top of the league table, and I just really wanted us to do well tonight so we could take home the win. You can actually get in your own way at times! Nevertheless, we managed to pull through in two straight games again.

Our third game meant tackling the home club Redbridge, although they had opted to use some of their reserves for the game. Although not the usual ladies, they were still incredibly strong and this one had to be dragged kicking and screaming into a decider. The younger of the two was a dynamite net player but she also had the strength to whack it one at the back, so hitting your lines and empty spaces became proper precision play to keep it out of their grasp. Her partner was also very adept at the net which did cause us some difficulty, but I am pleased to report we managed to power through to take the win. Kay played brilliantly and not only showcased her excellent clears and smashes but I was really impressed with how many impossible drop shots and net shots she returned to keep us in the point or the rally. It all adds up in the end! 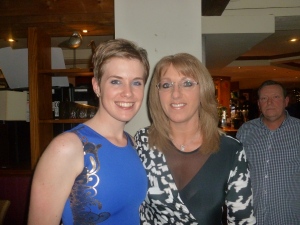 Our final game of the evening was against a mother-daughter team from training camp Emerson Eagles. The games here were completely level pegging, with the first two going to 21-20, each of us having a win and therefore taking the concluding match to a decider. These guys are definitely a difficult pair to play, as they are armed not only with very decent short serves, but also the strength at the back of the court. Usually, our best hope is wrong footing them or smashing into oblivion, although we also tried to be picky with our placement too. A skirmish over a shot that bounced off Kay’s racket frame, hit the top of the tape and went over cause rather a lot of upset for our opponents and I think this threw them off their stride to let us steal in and take the first win. The second game was more even tempered, but I think we both had the bit between our teeth. They definitely seemed to be aiming more body shot smashes at Kay, and I would also comment that they utilised more straight shots than cross court, taking a front and back playing style. The second game was also taken right to the limit, with Kay having a complete swing and miss moment at 20-20! It could have gone either way in the third, but Emerson Eagles really got their tactics together and were able to outplay us to pip us to the post, although 15 is still a decent score line.

Winning three out of four of our games, I am pretty sure this means Kay and I will maintain our position at the top of Division Two’s league table, meaning that we have won the division and will be taking home the silverwear! Unsurprisingly, Emerson Eagles are currently sitting in second snapping at our heels with Redbridge in third place and our B pair taking fourth. Corinthians bring up the rear of the table. I’m looking forward to seeing if anything changes after tonight’s results have been added, but either way, I’m really proud of how Kay and I have performed in our first season as a ladies duo – taking the win would just make that moment feel even more super special!

The mixed squad are also currently sitting in a leading position, although there is still one more game to be played by some of the other clubs in the division – although we are tentatively hoping for a second division win here, it is out of our hands until the final match has been played and the last results tallied up. I think if we win two trophies in one season, I’ll actually combust with happiness!